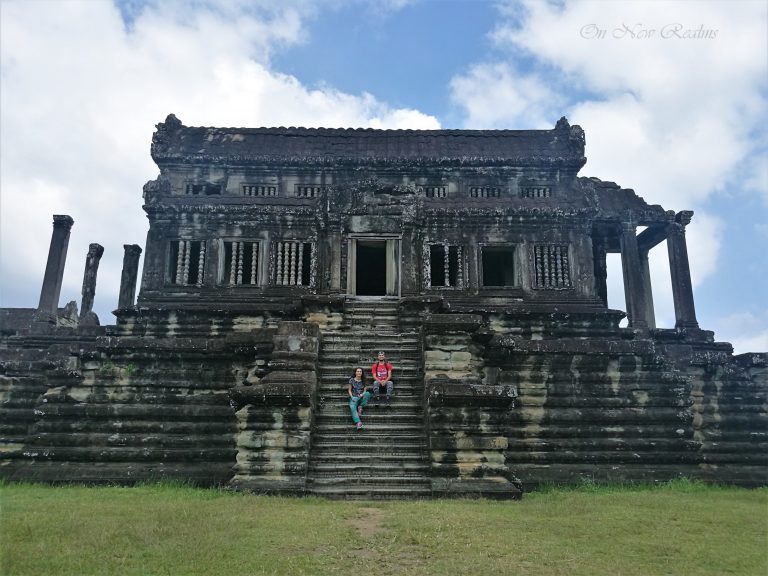 After few days spent in the capital of contrasts, Phnom Penh, we headed North towards Siem Reap. We have been always wanted to visit Angkor Wat since the moment we saw its beauty on Discovery channel. So here we are, exploring this incredible ancient ruin temple in the heart of Cambodia.

The Angkor Wat temple is actually the main temple form a huge complex of religious monuments. This impressive beauty is part of the UNESCO World Heritage since 1992. Angkor Wat means “City of Temples” in Khmer and to realize how important is this monument for Cambodian people, this temple is featured on their state flag.

From Phnom Penh to Siem Reap by bus

Angkor Wat is perhaps one of the most visited temples in the world, 2.6 million tourists visit this place every year. Therefore, the way to Siem Reap was a smooth and nice one. Also the beautiful countryside views make the bus trip worth it even more.

Giant Ibis is the most recommended transport company in Cambodia and around. So, we booked online 2 tickets from Phnom Penh to Siem Reap and we paid $15/ person. The trip was about 6 hours and we had on board a bottle of water and a croissant.

Siem Reap is quieter and nicer than the capital and definitely does not face the “bad smell” problem. That’s the reason why we actually exceeded our stay here with 5 more days than planned before.

To visit the complex of temples we opted for a tuk-tuk. We found a nice guy that stayed with us the entire day, explained us a bit about the culture, dropped us from a temple to another, plus, offered us unlimited cold water every time we needed. And he only asked for $15.

The entrance tickets are a bit expensive, we paid $37/ person for one day. But I swear, there was no regret after seeing this beauty. Have a look here for the ticket prices, as they are different depending on the plan you choose.

We managed to see the main 3 temples, Angkor Wat, Bayon and Ta Prohm (where Tomb Raider movie was filmed) plus few other small monuments.

Angkor Wat was the first one we stopped into. It is the largest religious monument in the world. It was initially build as a Hindu temple and later on transformed into a Buddhist one. There are many theories and legends about this place but it seems that the most known one is that the temple is actually a reconstruction of Mount Meru, the center of all the physical, metaphysical and spiritual universes.

We arrived there at around 10.30 AM and it was not crowded at all. There were so many places where we could totally enjoy the silence. It is so peaceful and calm there, a truly oasis of tranquility.

We spent around 2 and a half hours here, exploring every corner, structure or garden and being amazed of its uniqueness.

After finishing exploring the first temple we hopped on the tuk-tuk, grabbed a water and ate some fruits while the wind was cooling us. The perfect break before stepping into the multitude of serene and smiling stone faces creating the spectacular Bayon temple.

This Khmer temple was built in the same period of time like Angkor Wat, late 12th or early 13th century, with the same mix of religion, Hindu Gods and Buddha.

Strolling around Angkor Thom we found this nice Terrace of the Elephants, ruins of a place that was once used by the Angkor king to see his victorious returning army. For us was an amazing view point over the area.

And a great place to see some monkeys. 🙂

I like to describe it as the place where the nature takes back its territory. It is absolutely amazing. Being shrouded in dense jungle, fig, banyan and kapok trees spread their gigantic roots over the ruins.

You can easily transpose yourself here, into another world.

This was the last temple we visited that day. It looks similar in plan to Ta Prohm but on a smaller size. Banteay Kdei is a Buddhist temple and it is also known as the “Citadel of Monks“. We arrived here at the closure time so there were the security people, another couple and us.

And then, we headed to the lake located opposite the temple, Srah Srang. That was a super awesome way to end our exploring day. Sitting, relaxing, enjoying the sunset.

The Khmer temples are amazing and we enjoyed every single minute there. But besides this, it was amazing to simply admire the nature, the jungle, the locals, or even the monks.

So, 7 hours, 24346 steps, a magical place and perhaps one of the most beautiful and intense experiences we have ever faced. ❤️

Create the moments you want to remember!