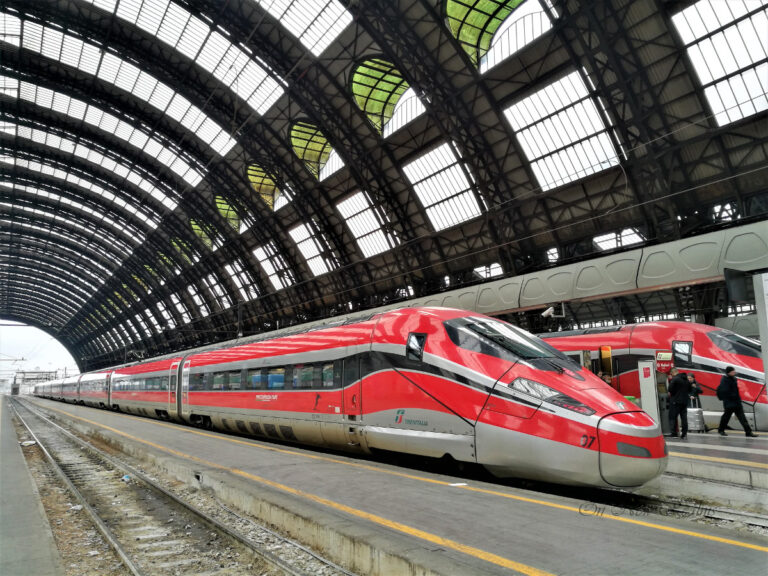 Train was always for me maybe the most exciting way to travel. I have been always associated it with a holiday and I find it a very relaxing and safe type of transport. That’s why I loved the idea of exploring the Northern Italy by train. 🤩

After our beautiful travel experience by train in Puglia we promised ourselves to do it again and again. So here it comes our new escapade by train, this time in the Northern part of Italy. We chose to discover cities from Veneto and Lombardy regions and just crossing Emilia-Romagna area, as the plane landed in Bologna.

This spectacular region of Italy comprising Alps, Apennines and Adriatic Sea, is pretty easy to discover it by train. There were two train operators we have relied on: Tren Italia and TreNord. They are cheap, usually reliable and important to highlight, not crowded during March (not sure during summer how things are).

It is important to know that for regional trains you cannot book your seat in advance but you can choose for a first or second class ticket and hope to easy find a seat 🙂 .

When we booked our flights we wanted to spend 2 days in Bologna but when we searched for accommodation the cheapest room was about €600/night 😐 (we still don’t know why). Therefore, as soon as we landed in Bologna Airport we headed directly to Verona.

We first took the bus from the airport to the Railway station (it’s the 4th stop) that leaves every 11 minutes. The tickets can be bought online or from the ticket machines located in the airport (very close to the exit). A one-way ticket costs €6 and has to be validated inside the bus.

After about 20 minutes trip we ended up in Stazione Centrale Bologna: people rushing, dozens of luggage, big queue at the ticket offices but plenty of ticket machines. An easy and fast option to buy your ticket. The train journey to Verona was about 1 hour and we paid €10,30/person.

This is another route that we included in our itinerary. Verona Porta Nuova railway station is small and well organized so you won’t need a lot of time to catch the train. The only moment when things change is whenever the ticket machines are not working (which we don’t think it happens very often but we had to face it). o_O

Once you arrive in Verona it’s a pity not to visit Venice. All you need is an hour and a half trip and €9,05/person. We suggest you to exit the train at Venice Santa Lucia station, the proper point to start exploring the city.

This was the only trip for us in Northern Italy that had delays (about 30 minutes). We didn’t mind as the landscapes are very beautiful while you are getting closer to the mountains. The best option is to stop to Milano Centrale as the metro is very well connected to the railway. The normal time spent for this journey is about 1 hour and 50 minutes and the cost starts with €12,75/person.

Maybe it’s not as touristic as Venice but Brescia deserves a visit. This city can be reached in one hour from Milan and the price for a ticket is €7,30. The central station is about 15 minutes walk to the old city center.

This was the fastest and cheapest train ride in this holiday: 15 minutes and €3.30/person. It is a cozy and charming city on the shore of Lake Garda and we really recommend you to consider it. The train station is small and it has 2 ticket machines, available for card transactions only (at that time).

We like to describe this trip as one of the most memorable ones 😀 . A normal train journey which lasts 55 minutes and costs €4,80/person ended up being a headache. Why? Because of a strike.

That tiny train station from Brescia became instantly crowded. Trains to different destinations were delayed or canceled and, lucky us, ALL morning trains to Bergamo were canceled. 😮 That was the moment when I realized that I know more Italian than I thought 😛 (don’t even try to speak in English when dealing with the information office staff during such a moment). Unfortunately it was a huge lack of communication from their end, no back-up solution or at least an advice was offered.

Anyway, we had a nice opportunity to meet really a nice girl from Czech Republic (Hi Petra 🙂 ) and together we figured all out. We gave up on the train idea and took a bus directly to Bergamo airport. A bus ticket costs €12/person and the ride is about 1 hour.  The amazing thing is that this bus terminus is located in the vicinity of the railway station. You can find here more details.

How to buy the tickets

There are a number of ways to buy your train ticket:

Hope you find this article useful! Contact us if there is something else you would like to know. 🙂

Create the moments you want to remember!

One thought on "Northern Italy by Train itinerary"